"In 1958, A. W. H. Phillips published in Economica what was to become one of the most widely cited articles ever written in economics. To mark the 50th anniversary of the paper, the New Zealand Association of Economists and the Econometric Society hosted the conference “Markets and Models: Policy Frontiers in the A. W. H. Phillips Tradition” in July 2008."

The January  issue of the journal Economica this year was devoted to papers from the A. W. H. 50th Anniversary Symposium, in honour of the New Zealander, A. W. H. ("Bill") Phillips, well-known to economists for his development of the so-called "Phillips Curve". I strongly recommend this issue of the journal.


Bill Phillips was a man of many talents, as has been described amply by a number of authors, including Blyth (1975) and Bollard (2011). Crocodile hunting in Australia; travelling to China and Russia in the 1930's; being appointed Took Professor at the LSE in 1958. Bill did it all. His influence on econometrics, in particular, has been discussed by Hendry and Mizon (2000). There's no doubt that he was a highly pragmatic fellow, as is exemplified by his ventures into analog computing, no doubt aided by his qualifications as an electrician!

Phillips' Moniac Machine (actually, several were made - including ones for the Ford Motor Co., and the Central Bank of Guatemala) was a hydraulic computer that could be used to demonstrate the ebbs and flows of the economy in highly visual terms. It was certainly an imposing machine: 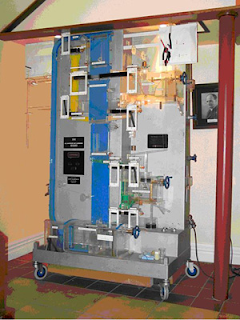 Various videos that demonstrate its application are available, such as here, here, and here.

"Bill Phillips was a great and modest man. Not only did he give a tremendous stimulus to applied economic research on wage determination and inflation, but his pupils and colleagues in London, Canberra and Auckland respected him for his integrity and competence, and loved him for his humanity ans enthusiasm". (Blyth, 1975, p.307.)

Fittingly, Bill is remembered and honoured by the A.W. Phillips Memorial Lecture, given at the annual Australasian Meetings of the Econometric Society.

Note: The links to the following references will be helpful only if your computer's IP address gives you access to the electronic versions of the publications in question. That's why a written References section is provided.