Some of my previous posts have dealt with the issue of replicability - e.g., here and here.

I had an email from Bob Reed today, alerting me to his involvement in the launching of The Replication Network. I knew that this was a big interest of Bob's, and it's great to see where things are going with this important venture.

"I would like to invite you to consider joining The Replication Network (TRN). TRN is a website/community of scholars committed to promoting the use of replications in economics.  For those of you who have seen an earlier version of the website, please note that the site has been thoroughly revamped in preparation for its “rollout” in June 2015.  I think you will like what you see.  You can check it out at :http://replicationnetwork.com/. For researchers interested in publishing replication studies, the website provides up-to-date information about (i) which journals encourage replication submissions, and (ii) a list of recently published replication studies that can serve as models of good practice.  It also lists News and Events related to replications. Membership has its privileges. :-)  Members can post their research on the website and are invited to contribute guest blogs related to replications.  Members will also receive email updates every few months alerting them to new content on the website. There is no financial cost to join TRN, you will not be bothered with advertising or other spam, and you can easily unsubscribe if you later choose to.  The main reason I encourage you to join TRN is because there is strength in numbers.  If journals can see that there is a substantial readership of academics who support replication research and are interested in seeing it promoted, they may choose to change their editorial policies to include the publishing of replication studies.  The lack of publishing outlets is the single biggest obstacle to the wider use of replication in economics.

Thank you for giving this some thought. And feel free to forward this email to your colleagues.

If you have any questions do not hesitate to contact me."


I hope that readers will check this out and spread the word.

Tragically, John and Alicia Nash died as the result of a road accident on New Jersey yesterday.

Just days previously, Nash was the co-recipient of the 2015 Abel Prize for his contributions to the theory of nonlinear partial differential equations. He was the only person to be awarded both the Abel Prize and a Nobel Prize (Economics, 1994).

It would be impertinent of me to try and comment meaningfully, here, on Nash's contributions to Game Theory.

Ferdinando is referring to Nash's Ph.D. dissertation, "Non-Cooperative Games", completed at Princeton University in May of 1950. Yes, it was just 27 pages long. One of the only two references was to von Neumann and Morgenstern's classic 1944 book, Theory of Games and Economic Behavior. The other was to Nash's own paper, published in the Proceedings of the National Academy of Sciences in 1950. It spanned just two pages, but was actually less than one page long!

Yes, sometimes it really is the case that, "Less is more". (Ludwig Mies van der Rohe)

(Suggested reading: "How Long Should My Thesis Be?".)

This post is prompted by a question raised by Irfan, one of this blog's readers, in some email correspondence with me a while back.

The question was to do with imposing inequality constraints on the parameter estimates when applying maximum likelihood estimation (MLE). This is something that I always discuss briefly in my graduate econometrics course, and I thought that it might be of interest to a wider audience.

I could scarcely believe my good fortune when I opened the following email earlier today:


Congratulations, your paper “Being ‘in’ assessment: The ontological layer(ing) of assessment practice” published in Journal of Applied Research in Higher Education has been selected by the journal’s editorial team as the Outstanding Paper of 2014. We aim to increase dissemination of such a high quality article as much as possible and aim to promote your paper by making it freely available for one year. I will confirm once the free access has gone live so that you will be able to let others know. This will be in the next couple of weeks. As a winner you will receive a certificate. Where possible, we like to organise for you to be presented with your certificate in person. We will be in touch with you shortly (next few weeks) in the hope that we can organize a presentation. Again, many congratulations on your award. We will be in touch with you regarding our plans to promote and present your award very soon. Please do not respond to this mail asking about when your chapter will be made freely available or about possible presentations. I will be in touch soon with all the details!!

Now, I must confess that I had some difficulty recalling the details of what I'd written to deserve this unexpected honour. But it must have been pretty darned good!

So, to refresh my memory I took a quick look at the 2014 volume of the journal in question. (Bookmark this link for future free access!)

Sure enough, there I it was - not the lead article, but close enough (apparently):

For reasons that I simply can't fathom, our library doesn't subscribe to this journal. For reasons that I definitely can fathom, neither do I! The promised free access has not yet "gone live", so I'll have to spare you the pleasure of a replication of the full text of the article here.

However, by way of recompense, here's the abstract:

Purpose
– Current discourses on educational assessment focus on the priority of learning. While this intent is invariably played out in classroom practice, a consideration of the ontological nature of assessment practice opens understandings which show the experiential nature of “being in assessment”. The purpose of this paper is to discuss these issues.

– Using interpretive and hermeneutic analyses within a phenomenological inquiry, experiential accounts of the nature of assessment are worked for their emergent and ontological themes.

– These stories show the ontological nature of assessment as a matter of being in assessment in an embodied and holistic way.

I can hardly believe I wrote that!


(I have replied to Mr. Bowden, expressing my gratitude but suggesting that a certain David Giles in the School of Education at Flinders University in Australia may be even more pleased to hear from him than I was.)

The Denis Sargan Econometrics Prize is awarded annually by the Royal Economic Society for "the best (unsolicited) article published in The Econometrics Journal in a given year by anyone who is within five years of being awarded their doctorate."

The prize was first awarded last year to Fabrizio Ferriani.

This year, the Sargan Prize for papers published during 2013 was awarded to Koen Jochmans (Sciences Po, Paris) for his paper, "Pairwise-Comparison Estimation With Non-parametric Controls". The announcement and award took place at the 125th Meeting of the Society, held in Manchester a few weeks ago.

Congratulations to Koen on this award, and thanks to Mark for the video interview.

It's also worth mentioning that videos of the the various special sessions that were held at the 2015 RES conference are also available. These include The Sargan Lecture, by Michael Keane; and a session on "The Econometrics of Matching".

The following question arose in a (fairly) recent email from Daumantas:

"I wonder if you could give any references -- or perhaps make a new blog post -- about testing for serial correlation: Breusch-Godfrey versus Ljung-Box test. I have no problem finding material on the two tests (separately), but I am interested in a comparison of the two. Under what conditions should one test be favoured over the other? What pitfalls should one be aware of before choosing one or the other test? Or perhaps both of them should be put to rest in favour of some new, more general, more robust or more powerful test?"

Daumantas apparently raised the same question on stackexchange, and got some sensible responses.

If this interests you, the response there that refers to Chapter 2 of Fumio Hayashi's, Econometrics

, is right on target. There's no point in me repeating it here.

Rob Hyndman also had an interesting and useful post about the L-B test.

My recommendation - stick with the Breusch-Godfrey test if you're testing regression residuals.

Arguably, Judea Pearl is the most influential "Causality Specialist" of our time. (My term, not his!)

If you don't subscribe to his blog (Causal Analysis in Theory and Practice) and newsletter already, I'd suggest that you do so.

Judea also has several very informative video interviews that should be of interest to economists and econometricians. For example:

"Bill Lumbergh" will continue to terrorize the office via my tweets at @DEAGiles: 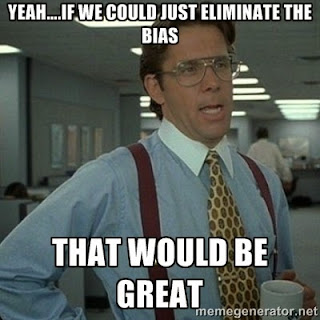 p.s.: Actually, I do own a "Swingline" stapler, and I'm thinking of re-spraying it fire-engine red.

On the Invariance of MLE's

The Maximum Likelihood Estimator (MLE) is extremely widely used in statistics, and in the various "metrics" disciplines such as econometrics. This is because this estimator has several highly desirable properties, as long as the sample size is sufficiently large.

In small samples, the MLE may or may not have good "sampling properties". For instance, it may be biased or unbiased, depending on the estimation problem under consideration.

When teaching this material, instructors invariably mention another nice property of the MLE: it's an "invariant estimator".

What does this actually mean?

In fact, this statement of the property is unduly strong. The function, f( . ), simply needs to be continuous - it doesn't need to be 1-1. (The proof of the result is especially simple if f is 1-1.)

In support of this more general result, I usually refer my students to the note by Zehna (1966). Recently, I became aware of some other important references when I read a paper by Olive (2004).

In particular, Berk's  (1967) review of Zehna's paper provides a simple proof of the general result.

An obvious implication of the generality of the invariance theorem is that if σ*2 is the MLE of the population variance, σ2, then √(σ*2) is the MLE of σ. This wouldn't be the case if the theorem was restricted to just 1-1 transformations!

Olive's paper will definitely be on my reading guide for students in future courses that I teach.

Reading for the Merry Month of May

While you're dancing around the Maypole (or whatever else it is that you get up to), my recommendations are: