I'm currently in New Zealand - hence the smaller number of posts recently - and I came across the following example of a "best before" date on the lid of a jar of marmalade: 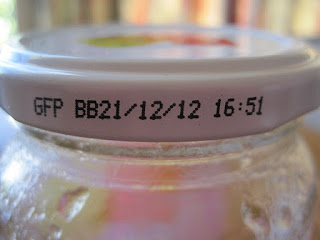 Not only does the manufacturer ("Pams") have the uncanny ability to nominate the expiry date right down to the last day (20 December, 2012 in this particular case), but they can even time it to the minute - 4:51p.m.! You might think that's impressive, but of course it's completely meaningless. If they'd said "end of 2012", I might have taken them seriously.

This sort of pretense at having perfect pitch is silliness in the extreme. Am I really going to die of food poisoning if I eat the marmalade at 4:52p.m. on the "best before" date? I doubt it!

Unfortunately, we see the same sort of silliness when it comes to reporting the results of econometric analysis. We see researchers using data that are accurate to (say) one or two decimal places at best, and then reporting estimated regression coefficients, standard errors, p-values, and various diagnostic test statistics to four or five decimal places.

This is just spurious precision, and a waste of everyone's time.

I recall that when I took introductory Physics, we spent quite a bit of time in the first few lab. classes, dealing with this very issue. The genuine precision of your results depends on the precision of your original data, as well as on the nature of the calculations you're performing.

Perhaps this is something we should emphasise a bit more in our teaching of econometrics.