Another Gripe About the Linear Probability Model

NOTE: This post was revised significantly on 15 February, 2019, as a result of correcting an error in my original EViews code. The code file and the Eviews workfile that are available elsewhere on separate pages of this blog were also revised. I would like to thank Frederico Belotti for drawing my attention to the earlier coding error.

So you're still thinking of using a Linear Probability Model (LPM) - also known in the business as good old OLS - to estimate a binary dependent variable model?

Yes, yes, I've heard all of the "justifications" (excuses) for using the LPM, as opposed to using a Logit or Probit model. Here are a few of them:

Oh really? That don't impress me much!

Why not? Well, in almost all circumstances, the LPM yields biased and inconsistent estimates. You didn't know that? Then take a look at the paper by Horrace and Oaxaca (2006), and some previous results given by Amemiya (1977)!

It's not the bias that worries me in this particular context - it's the inconsistency. After all, the MLE's for the Logit and Probit models are also biased in finite samples - but they're consistent. Given the sample sizes that we usually work with when modelling binary data, it's consistency and asymptotic efficiency that are of primary importance.

If you're not feeling up to reading the Horrace and Oaxaca paper - bad news is always unpleasant - here's their key result. Let xi denote the ith observation on the vector of covariates, and let β be the vector of associated coefficients. So, xiβ is the true value of the ith element of the "prediction vector".

OLS estimation of the Linear Probability Model will be both biased and inconsistent, unless it happens to be the case that 0 ≤ xiβ ≤ 1, for every i.

"Although it is theoretically possible for OLS on the LPM to yield unbiased estimation, this generally would require fortuitous circumstances. Furthermore, consistency seems to be an exceedingly rare occurrence as one would have to accept extraordinary restrictions on the joint distribution of the regressors. Therefore, OLS is frequently a biased estimator and almost always an inconsistent estimator of the LPM."

Perhaps a small Monte Carlo simulation experiment will be helpful?

Here's what I've done. I generated binary data for my dependent variable, y, as follows:


Then, I estimated both a Probit model and a LPM, using the y and x data. In each case I computed the estimated marginal effect for x. (In the case of the LPM, this is just the OLS estimate of the coefficient of x.) Of course, as I know the true values of β1 and β2 in the data-generating process, I also know the true value of the marginal effect. For the Probit model I calculated the marginal; effect at the sample mean of x. An alternative would have been to have averaged the partial effects, computed at each sample point. This is something I'll write a post about at a later date.


For a fixed sample size, n, I replicated this 5,000 times. Various sample sizes were considered.

The EViews workfile and program file are on the code page for this blog. (I'm sorry that I didn't do this one in R! However, the EViews program file is also there as a text version of it for ease of viewing.)

Here are some summary results (Probit followed by LPM), first for n = 100 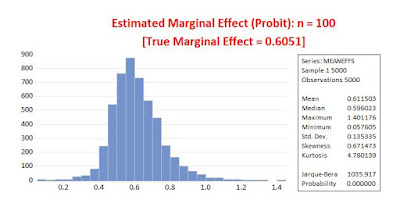 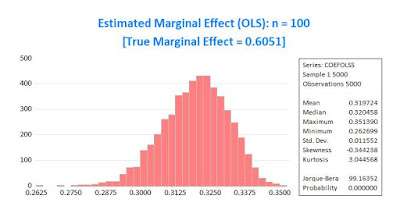 Comparing the means of the sampling distributions (0.6115 and 0.3197) for the estimated marginal effects with the true value of 0.6051, you can see that the LPM (OLS) result is biased downwards, whereas the Probit result has virtually no bias. 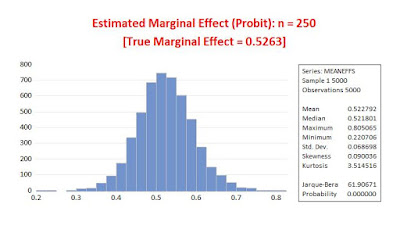 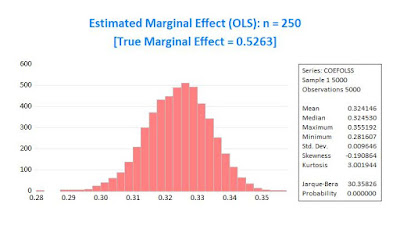 Notice that the mean of the sampling distribution for the Probit-estimated marginal effect (0.5228) is very close to the true value of 0.5263. In contrast, the OLS/LPM estimator of the marginal effect is biased upwards (being 0.3241, on average). 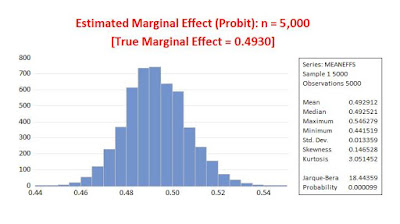 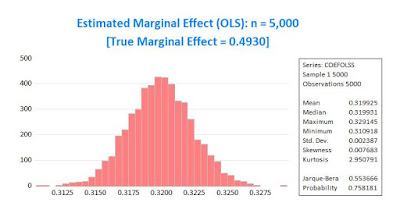 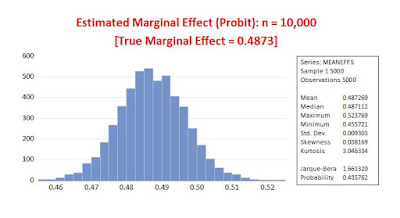 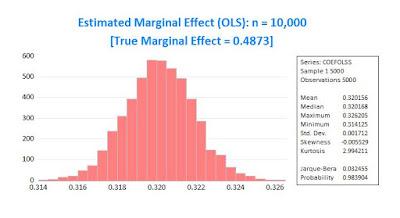 We can see that the marginal effect implied by OLS estimation of the LPM is converging to a value of approximately 0.32, as n increases. The standard deviation of the sampling distribution for that estimator is getting smaller and smaller. The inconsistency of the estimator is being driven by asymptotic bias.

On the other hand, the marginal effect implied by maximum likelihood estimation of the Probit model is converging to the true marginal effect  - even though the latter value is changing as n increases. In fact, this convergence is quite rapid. The (small) bias vanishes, and the standard deviation of the estimator continues to decrease, as the sample size grows.

So much for the last of the "reasons" for using the LPM in the bulleted list near the start of this post!

So, recalling Horace and Oaxaca's results, that's why OLS estimation of the Linear Probability Model is both biased and inconsistent, here. The maximum likelihood estimator is consistent, and its bias is quite small in finite samples, in this experiment.

Yes, there are some situations where I'd consider using an LPM. For example, with a complex panel data-set, or when there are endogenous dummy covariates. However, in the typical case of cross-section data, and no other complications, you'll have to work pretty hard to convince me!