On Crime and Punishment

Quite regularly, I take a look at the "Graphic Detail" blog that's published each business day on The Economist's website. Many of the graphs, maps and infographics that they produce are rather interesting.
Today's one is taken from a recent study, "Divergent Effects of Beliefs in Heaven an Hell on National Crime Rates", published by Azim Shariff and Mijke Rhemtulla  in the open-access journal, Plos One.
Here's the abstract from that paper:


"Though religion has been shown to have generally positive effects on normative ‘prosocial’ behavior, recent laboratory research suggests that these effects may be driven primarily by supernatural punishment. Supernatural benevolence, on the other hand, may actually be associated with less prosocial behavior. Here, we investigate these effects at the societal level, showing that the proportion of people who believe in hell negatively predicts national crime rates whereas belief in heaven predicts higher crime rates. These effects remain after accounting for a host of covariates, and ultimately prove stronger predictors of national crime rates than economic variables such as GDP and income inequality. Expanding on laboratory research on religious prosociality, this is the first study to tie religious beliefs to large-scale cross-national trends in pro- and anti-social behavior." 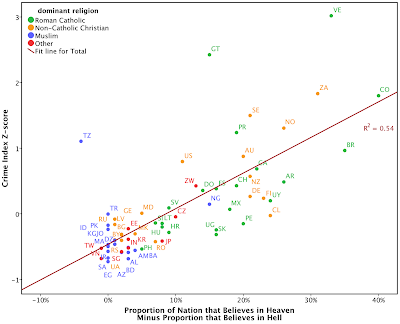 Now, to be fair to the authors, they do acknowledge (in the "Limitations and Future Directions" section of their paper):


"First and foremost, these findings are correlational, and thus reverse-causation and third variable explanations need to be discounted before causal claims can be firmly endorsed."

However, they then (immediately) continue:


"However, at least two reasons suggest that a causal effect of these religious beliefs on crime is a plausible explanation for the pattern of results.

First, obvious third variable candidates such as differences between countries in national personality, wealth, wealth distribution, and general religiosity show no indication of driving the effects. Second, numerous lab studies have established direct causal effects for religious beliefs on both pro- and anti-social behaviors. The possibility remains that the lab effects and the international crime rate effects are entirely unrelated, but parsimony suggests that both are, at least to some degree, a reflection of the same underlying causal story. Nevertheless, future research would be beneficially directed towards addressing possible alternative explanations."

My interpretation of what they're saying here - "we believe there's a causal relationship".

If you take a look at this study, I think you'll find quite a few things that warrant an eye-roll.

I'll be interested to see your comments about how you would have undertaken the statistical analysis differently!