Some Properties of Non-linear Least Squares

You probably know that when we have a regression model that is non-linear in the parameters, the Non-Linear Least Squares (NLLS) estimator is generally biased, but it's weakly consistent. This is the case even if the model has non-random regressors and an additive error term that satisfies all of the usual assumptions.

In this post I'll illustrate these, and some other results, by using a simple Monte Carlo experiment.

As the sample size grows without limit, eventually the bias of the NLLS estimator vanishes – it's an asymptotically unbiased estimator. Generally, its variance also converges to zero, meaning that the estimator is mean square consistent as well as weakly consistent.

Also, as the sample size grows, eventually the sampling distribution of the NLLS estimator becomes (asymptotically) normal, due to the central limit theorem, and the t-statistics have their usual asymptotic properties – in particular, they will also be normally distributed.

I've used the EViews workfile and program file, available on the code page for this blog, to illustrate the above results for this very simple non-linear regression model:

The values assigned to the parameters are β1 = 1.0; β2 = 2.0; and σ = 1.0. Using 5,000 replications in the Monte Carlo experiment, the following results were obtained with respect to the NLLS estimator of  (see the READ_ME text-object in the EViews workfile):

These results illustrate the bias and the mean-square consistency of the estimator. Although a sample of size 500 appears to be sufficient for the consistency of the estimator to become apparent, the convergence is not so rapid when it comes to the normality of the sampling distributions for the estimator itself and for the associated t-statistic (let's call it t2) for testing H0: β2 = 2. (So, the null hypothesis is true.) This is illustrated in the following charts.

The non-normality of the sampling distribution of b2 is obvious. 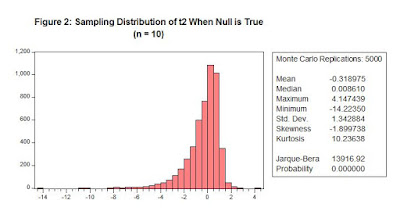 It's clear that the sampling distribution of t2, the t-statistic, is neither t-distributed nor normally distributed.

The non-normality of the sampling distribution of b2 is quite clear from the skewness coefficient, and the p-value associated with the Jarque-Bera test statistic. 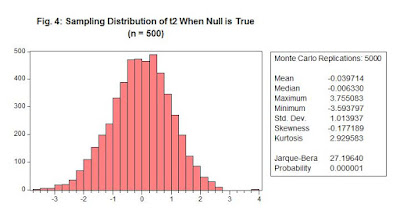 The non-normality of the sampling distribution of t2 is really obvious from the skewness coefficient and the  very small p-value for the Jarque-Bera test statistic.

Using the Jarque-Bera test, we can't reject the hypothesis that the sampling distribution of b2 is normal, when n = 10,000. 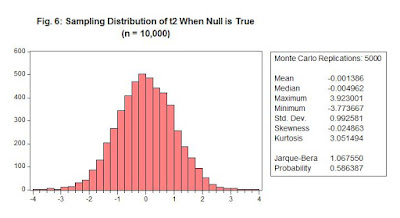 Finally,we cannot reject the hypothesis that the sampling distribution of t2 is standard normal when n = 10,000.

As we can see, even when we have a very simple non-linear regression model, we may need a VERY large sample size before the asymptotics fully come into play.

This last point is pretty important. Students often ask: "How large does the sample size have to be before we can rely on results that are valid only asymptotically?" The correct answer (and it's not a "cop-out") is: "It depends."

It depends on the particular problem, the data values, and often the true values of the unobservable parameters. So, be cautious!