A recent email query about the language that we use in the context of non-stationary seasonal data, and how we should respond to the presence of "seasonal unit roots", suggested to me that a short background post about some of this might be in order.

To get the most from what follows, I suggest that you take a quick look at this earlier post of mine - especially to make sure that you understand the distinction between "deterministic" seasonality" and "stochastic seasonality" in time-series data.

There's an extensive econometrics literature on stochastic seasonality and testing for seasonal unit roots, and this dates back at least to 1990. This is hardly a new topic, but it's one that's often overlooked in the empirical applications.

Although several tests for seasonal unit roots are available, the most commonly used one is that proposed by Hylleberg et al. (1990) - hereafter "HEGY". Depending on what statistical/econometrics package you prefer to use, you'll have at least some access to the HEGY test(s), and perhaps some others. For instance there are routines that you can use with R, stata, and Gretl.

The EViews package includes a rather complete built-in suite of different seasonal unit root tests for time series data with various periodicities - 2, 4, 5, 6, 7, and 12. This enables us to deal with trading-day weekly data, and calendar weekly data, as well as the usual "seasonal" frequencies.

I'm not going to be going over the tests themselves here.

Rather, the objectives of this post are, first, to provide a bit of background information about the language that's used when we're talking about seasonal unit roots. For instance, why do we refer to roots at the zero, π, frequencies, etc.? Second, in what way(s) do we need to filter a time series in order to remove the unit roots at the various frequencies?

In fact, each of these roots can be written as complex numbers, each of the form (x + iy). For instance, the root L = 1 corresponds to the case x = 1, y = 0. You may also recall that instead of expressing a complex number in terms of Cartesian coordinates, we can write it in terms of polar coordinates. That is, we can write it in the form r(cosθ + i sinθ), where "r" is what we call the "radial coordinate", and θ is the "angular coordinate". Without loss of generality, we'll normalize the former and set r =1 in what follows.

Alright, so where does this leave us? Well, we're going to have to recall some of that trigonometry that you learned in high school!

Let's look at the graphs for the sine and cosine functions, with the argument (x) measured in radians: 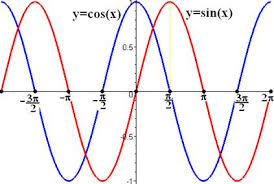 These two functions "repeat themselves" every 2π radians (i.e., 360 degrees). This corresponds, of course, to going exactly once around a circle.

(We don't need to worry about the additional multiples of 2π, as this would take us "around the circle" more than once. So let's forget about this detail.)

To summarize, we can have roots of equation (1) that correspond to one or more of the zero, π, or π/2 or 3π/2 frequencies. Moreover, these last two frequencies really need to be thought of as a pair - after all, they're associated with a complex conjugate pair in the Cartesian coordinate system, whereas the other two roots are "real".

So much for the language associated with seasonal unit roots.

What filters are need to eliminate the various roots, so as to render the X series stationary?

The above discussion is cast in terms of quarterly time-series data. If we have data that are recorded twice-yearly, you should be able to see from the factorization (1 - L2) = (1 - L)(1 + L) that there can be unit roots only at either the zero or π frequencies. (See Feltham and Giles, 2003, for more on this.)